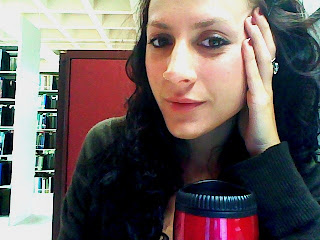 Coffee in hand and surrounded by books! I look as tired as I feel in that picture. I've spent a majority of my time with one book in particular Love Letters of Henry VIII, I've never received a "love letter" per say, I have received the silly notes in high school and some sweet texts...but no letter. Being the history nerd that I am, I always wonder what it was like back in Henry's time when men and women actually wanted to be married and bear children. I probably would've ended up like his daughter Elizabeth, never married but always flirting, her and I would've definitly seen eye to eye. She saw the importance of her "job", and the politics of love. She chose to keep men at arm's legnth but their affections very close at hand, she did this so that she didn't appear weak, I love it.
Speaking of weak, I seem to have this unwarranted reputation that follows me. Girls tend to hate me, they feel like I'm out to get their boyfriends/ex-boyfriends etc. I can explain to them until I'm blue in the face that I would never do that, HAVE NEVER done that, but it never gets me anywhere. They have "dreams" and "premonitions" then...magically I'm ousted from the inner girl gang as the outcast man-grabber. When looked at in the context of my life, it's comical. My bio-daddy ruined my early childhood by being a cheat/dirt bag and my aversion to cheating is so ingrained since littledom that I automatically find a man unattractive if he's trying to cheat. I am one hell of a loyal friend, I always put my friendships first and none of this matters, my maybe-man-stealing capabilities are just insurmountable for these girls with no confidence. So you say, "well obviously they aren't meant to be your friend", it has happened in EVERY friendship (minus my beautiful married Danielle) sometimes the friendship recovers, most of the time I get fed up trying to prove my innocence I just give up. If only "innocent until proven guilty" was a mainstay in the everyday.
Lock up your men ladies, I may just want to be your friend.
Posted by Amber Joy at 1:51 PM