I'm sure everyone has a habit they can't break and I hear the first step is to admit the problem exists. So, here I go....I shop. I LOVE new clothing just seeing it all lined up for me by color or style so neatly I just can't help but touch and purchase all I see! It makes me happy, what can I say? To put myself into a little perspective I've decided to take a picture of some of the stuff I just "had to have" in the past week or so, this isn't even all of it! It's ridiculous, I am a poor college student and my weakness is clear! Working retail does not help at all (especially when that job is at Anthropologie eek!)
Alright so here it is, some of my recent purchases they are a mess from Forever 21, Anthrolologie, Urban and Sephora! I just had the try the "Living Proof: Full Thickening Cream" from Sephora, has anyone used it? 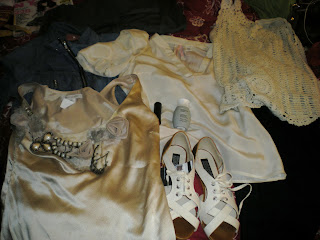 I have been searching for the "perfect" red-orange lipstick for spring and I really love this one. "It Girl"- Sephora. 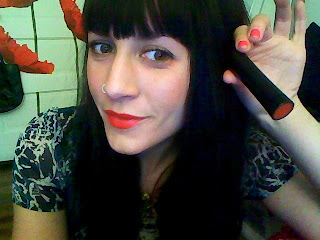 Finally to close this peek into my addiction, this little number is from Urban. I just bought it today and now I can't wait for Spring time!! 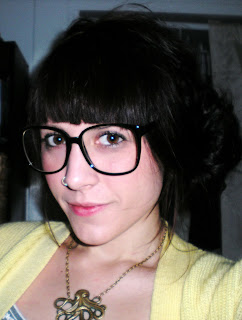 I am so tired and a little bit sick, but trying to stay "perky". I've been nyquiled out for awhile and watching fun movies... and let me say Wayne's World and Zoolander are really great with shot of the green goodness. The Nyquil has also given me the best nights sleep I've gotten since the new roomies moved in. We have a GIGANTIC (67 inches of HD blast your face off madness) hdtv in our home thanks to my other room mate and watching movies on that thing is A-M-A-Z-I-N-G, but watching it with the volume way up at 3:45 am while your roommate (who has school in the morn) is trying desperately to sleep...not so amazing. I asked if there was some sort of compromise, but apparently that is "imposing" on her schedule and when she really "enjoys" her time at home. So, now I'm sick and chugging the other "green fairy"all so she can blast Interview with a Vampire to her heart's content. Oops, so much for perky.
Other than that life is trucking along, I'm applying to Texas State this week and I am super nervous about it. Eeek.
Alright, I can't see all that straight anymore. Goodnight!
Posted by Amber Joy at 12:41 AM 3 comments: 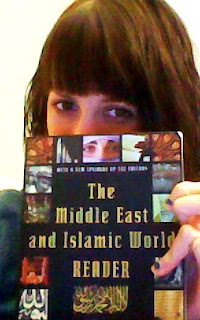 I've slacked a little (maybe a lot) in my upkeep of this here bog. School has started and I can not pull my head up out of my homework long enough to write something decent (worth reading) in my opinion. So, I will write a quick overview.
Classes are great...a ton of work, but ultimately really great. My history of the modern middle east course is phenomenal. We as Americans really just don't get it and the "information" we are handed just isn't cutting it. You have to go further, that civilization and the religion that dominates the social and political systems, deserves so much more attention and research. It will surprise you with the amount of misinformation you have been force fed by American ethnocentrism. For instance...did you know that the Qua ran, for it's time, was the most "woman friendly" established religious text? It gave women so many rights and standing in society that they had never had before....the extremism has to do with political regimes. Islam itself protects women.
Now, I'm not a religious person. I was raised very Christian, but I asked too many questions that couldn't be answered. I clearly have a bias...but, I think religions as well as its effect on people, politics and foreign policy to be some of the most interesting social institutions from ancient to modern times. The middle east is a testament to what religion can do...bring together and force apart in the most extreme sense of those two ramifications. So though I am definitely not a "believer" in the organized sense, there is just too much to learn from religion to ignore it completely.
As you are probably bored, I will finish up my tirade. The book you see me holding is a good start if you're at all interested, and all of this (as you can see) is really grabbing at me, maybe it will you too!
Posted by Amber Joy at 11:06 PM 4 comments: