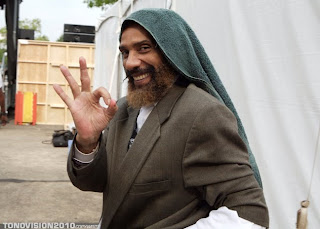 I had the opportunity to see the original line up of the legends of Bad Brains come together and play at The Mohawk here in Austin. I was well aware that H.R was no longer that kind of front man, but to see him moving in slow mo and not speaking real words...woah. Drugs are bad. Real bad. It was comical watching him speak to his imaginary friend behind a speaker, while wearing his bullet proof vest. Their set went 2 punk then 2 reggae and back again. It was so funny to see the kids really unsure what to do after The Regulator stopped and "jah la la looooo oooolooo (??)" started. The band was there, though it was just H.R. who is now a puppet who blows kisses every 2 minutes that was hard to watch. Over all though, it was enjoyable and I can't complain that I had the opportunity to hear those legendary tunes played by the originals...live.
Posted by Amber Joy at 11:21 AM